The Beechcraft Super King Air family is part of a line of twin-turboprop aircraft produced by Beechcraft. The Model 200 and Model 300 series were originally marketed as the “Super King Air” family, but the “Super” was dropped in 1996. They form the King Air line together with the King Air Model 90 and 100 series.

The King Air 200 is a continuation of the King Air line. Originally conceived as the Model 101 in 1969, was a development of the Model 100 King Air, with new features including:

Overall, the 200 was 1.17 m longer than the A100, with wingspan 1.29 m greater, containing 230 L more fuel. Maximum Take-Off Weight (MTOW) was increased by 450 kg. After protracted development including extensive wind tunnel testing of the design (especially of the T-tail which was tunnel-tested for 375 hours), the first prototype flew for the first time on October 27, 1972; a second prototype took to the air on December 15 the same year.

Three production aircraft were also built in 1972 and delivered to the U.S. Army; these three were designated Model A100-1s by Beechcraft and were given the military designation RU-21J; the first of some 400 T-tail King Airs to be ordered by the U.S. armed forces.

The 200 received civil certification in December 1973 and the first civil delivery took place in February 1974.

In 1976, Beechcraft developed the Model 200T, a version configured for aerial surveying or reconnaissance. The next model to appear was the Model 200C in 1979; this version had a large cargo door on the LH side of the rear fuselage with an airstair door similar to the Model 200’s door built into it. The door opening was 1.33 m high and 1.33 m wide, allowing a large range of items to be loaded into the cabin. The Model 200C found favour with many operators who fitted them out internally as Air Ambulances. The 200C was built from scratch rather than as a modification of the Model 200. The Model A200C military version was developed concurrently.

The Beechcraft 1900 regional airliner was derived from the Model B200 King Air.

The 200 series proved so popular that Beechcraft began work on a successor, with the Beechcraft designation Model 300 and marketed as the “Super King Air 300”. The B200’s airframe was “cleaned up” and even more powerful engines (PT6A-60A, rated at 1050 shp) installed in redesigned cowlings ( due to the reshaped engine air intakes), with MTOW increased to 14,000 lb (6,300 kg).

The first flight of the prototype Model 300 took place on September 3, 1983 and deliveries commenced the following year.

By 1988, Beechcraft had begun work on the replacement for the 300. The fuselage of the 300 was stretched by nearly three feet with two extra cabin windows on each side and winglets added to the wingtips to create the Model B300, introduced in 1990 and initially marketed as the Super King Air 350.

MTOW was increased again to 15,000 lb (6,750 kg); as the same regulatory situation that led to the development of the 300LW still existed, that model continued to be produced until 1994. Like the 200 and B200 before it, a version with a large cargo door was developed, the Model B300C marketed as the “Super King Air 350C”. The first deliveries of this model also took place in 1990.

Beechcraft currently offers the 250 (design. B200GT) and the larger 350i (B300) models. The 350ER (B300CER) is available to government, military and commercial customers for special mission operations such as aerial survey, air ambulance, flight inspection and surveillance. 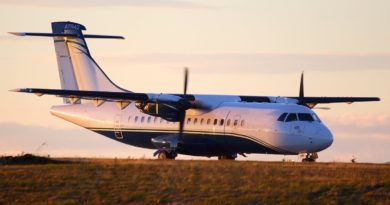 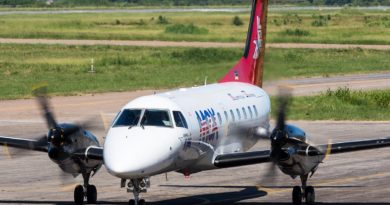